You are here: Home / General / Let’s stop with the labeling…

Lately, I seem to hear a lot more people labeling other people. For example, you say something nebulous like, “I had a peanut butter & jelly sandwich for lunch,” and all of a sudden someone shouts, “You LIBERAL!” Our actions or our words can get us labeled a left-winger, a liberal, a reactionary, a conservative, a communist, to name just a few. And these words aren’t used as a way to just identify what we might believe; instead they are a way to antagonize or bully us. The “You liberal!” is said in a way that makes it clear you are less than the person talking; that your opinions are dirt; that you should be ashamed of yourself. This type of name-calling is no better than calling kids at school fatty or nerdy or using words that negatively reflect on someone’s ethnicity.  Please people, cut it out.  It’s pointless, and labeling gets in the way of having true and meaningful discussions.

Can’t we be friends?

I am friends with all different kinds of people: people who are self-identified republicans as well as those who are active democrats. I have friends who are heterosexual, gay, white, black, latino, Christian, Jewish, to name just a few. To me, none of that stuff matters; it’s the person that matters. Are they trustworthy? Fun? Funny? Open? Ethical? Honest? Having friends with varying views makes discussions interesting, and if I really listen to their rationale and am open to their thoughts, I can see both sides of an issue and sometimes even change my viewpoint. We can’t be friends though if your goal is to smash me about the head with your beliefs in the attempt to force me to believe what you believe. And we can’t be friends if every time I open my mouth and say something you don’t like, I get labeled. That’s just not the way to encourage conversation.

Can’t we have a mixture of beliefs? 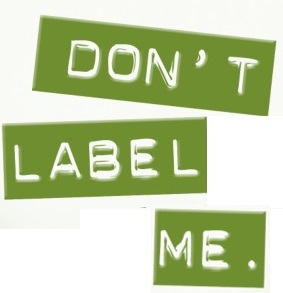 I am a registered Independent, mostly because I did not want to be identified with any specific group since my beliefs don’t neatly fit in any one bucket. Based on the specific issue being discussed, I might lean more to the left or the right. I’ve voted for Republicans, Democrats, and third party candidates. With every new election, I wipe the slate clean, see which candidate is a better choice (or a least worse choice) and that’s how I vote. I take my role as an American seriously — I think I’ve only missed one election in the last 36 years. So can’t we have a mixture of beliefs that doesn’t fit neatly in any one group? Yes, we absolutely can and, in fact, I think thinking outside the “defined” boxes is healthy.

So enough with the labels!

The other day I said something about not wanting to go somewhere that had a “do not enter” sign and I was called a liberal.  Huh?  I didn’t even see how the response related to the action, but the bottom line was it annoyed me. I don’t want to be lumped in with any specific group. Why? Because I’m me. I’m Kat. I believe what I believe. Sometimes I believe the same thing as people I am with, and sometimes I don’t. Sometimes I believe things that fit neatly in a bucket and sometimes I don’t. And that’s just fine. If this country were filled with people who all thought the exact same way, and voted the same way, well, then, we wouldn’t be in this country, would we? Having different opinions and being able to state those opinions is one thing that makes the USA a great place to live. So in my opinion, we all need to respect other people and we need to listen without calling them names. It’s certainly okay to disagree. But let’s do it nicely.

Let’s stop with the labeling.

Review: Woodcock Auto Body, Washingtonville NY A few weeks ago, as I drove down a local street, a deer ran into the truck I was driving. As you can see from the photos below, the passenger side was damaged. After contacting my insurance company, and getting a recommendation for an auto repair shop from my … END_OF_DOCUMENT_TOKEN_TO_BE_REPLACED

Walton Lake, Monroe NY Walton Lake is a reservoir located in Monroe NY, accessible from Lakes Road. Yesterday was the first day of the Memorial Day weekend and it was a great morning for a paddle. As I was moving my canoe down the lake, I thought it was a perfect time to share information … END_OF_DOCUMENT_TOKEN_TO_BE_REPLACED

Things to do in Orange County NY this winter (cooking). In the winter in Orange County NY, the wind howls, the ground may be covered with ice and snow, but that doesn’t mean you have to stay in! If you’re willing to warm your car up, get bundled up, and go out, there’s plenty to … END_OF_DOCUMENT_TOKEN_TO_BE_REPLACED

2017 Christmas Cookies to Kat’s Clients Every Christmas season since I started in real estate, I’ve made homemade Christmas cookies as a gift for my clients from the past year. It’s a thank you for those who trusted me with their home sale, purchase or lease. As December 2017 is now upon us, my 2017 treats … END_OF_DOCUMENT_TOKEN_TO_BE_REPLACED

Monroe NY – Are You OK Program I just learned today that the village of Monroe NY has a program called RUOK, or the Are You OK Program. It is specifically intended for anyone who lives alone. The person fills out an application, which includes their phone number as well as phone numbers for any … END_OF_DOCUMENT_TOKEN_TO_BE_REPLACED